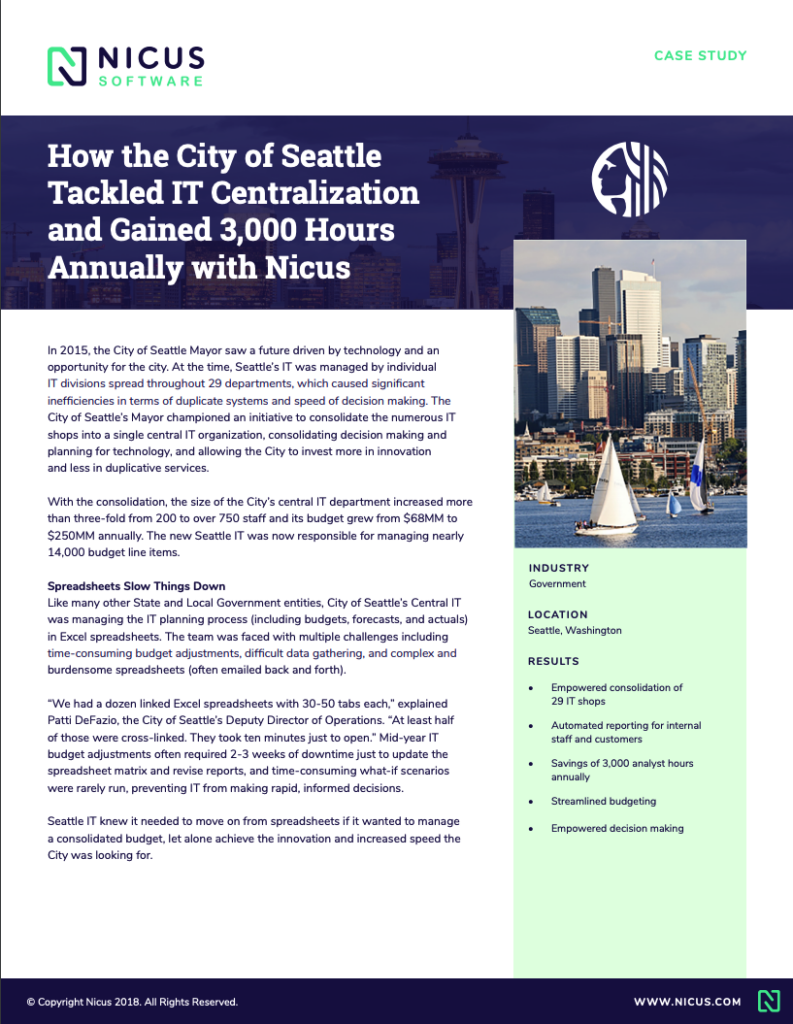 In 2015, the City of Seattle Mayor saw a future driven by technology and an opportunity for the city. At the time, Seattle’s IT was managed by individual IT divisions spread throughout 29 departments, which caused significant inefficiencies in terms of duplicate systems and speed of decision making. The City of Seattle’s Mayor championed an initiative to consolidate the numerous IT shops into a single central IT organization, consolidating decision making and planning for technology, and allowing the City to invest more in innovation and less in duplicative services.

With the consolidation, the size of the City’s central IT department increased more than three-fold from 200 to over 750 staff and its budget grew from $68MM to $250MM annually. The new Seattle IT was now responsible for managing nearly 14,000 budget line items.

Like many other State and Local Government entities, City of Seattle’s Central IT was managing the IT planning process (including budgets, forecasts, and actuals) in Excel spreadsheets. The team was faced with multiple challenges including time-consuming budget adjustments, difficult data gathering, and complex and burdensome spreadsheets (often emailed back and forth).

“We had a dozen linked Excel spreadsheets with 30-50 tabs each,” explained Patti DeFazio, the City of Seattle’s Deputy Director of Operations. “At least half of those were cross-linked. They took ten minutes just to open.” Mid-year IT budget adjustments often required 2-3 weeks of downtime just to update the spreadsheet matrix and revise reports, and time-consuming what-if scenarios were rarely run, preventing IT from making rapid, informed decisions.

Seattle IT knew it needed to move on from spreadsheets if it wanted to manage a consolidated budget, let alone achieve the innovation and increased speed the City was looking for.

Nicus Speaks the Language of Government

The City of Seattle evaluated several ITFM tools/vendors in hopes that Central IT could not only properly manage the consolidation project but also create operational efficiencies that could lead the organization to true IT cost transparency and informed decision-making.

The City chose Nicus. Unlike other ITFM vendors, Nicus understood the unique needs of local government. “Nicus could talk the same language,” said DeFazio. The transition from many disparate departments tracking IT expenditures and budgets with spreadsheets to one centralized department was no small feat. “I honestly don’t know how we would’ve done it without Nicus,” added DeFazio.

The payoff has been significant. Overall, Nicus has improved IT effectiveness, increased efficiency throughout the City and provided the means to knowledgeably manage the City’s vast technology stack.

Now, instead of budget adjustments, Seattle IT can focus on analysis, resource management and planning for the City’s imminent growth. The increase in staff productivity and the ability to deliver accurate and timely IT budget detail has allowed Seattle IT to provide stakeholders reliable data to facilitate empowered planning and cost modeling.

Unlock the Potential of IT

With the implementation of Nicus, the City of Seattle has been able to create a streamlined and responsive IT division. Armed with the tools to be able to record, track and manage reliable ITFM data and use the data to provide stakeholders critical information needed to manage budgets and IT spend, Seattle IT has become a strategic business partner that ensures the City is empowered to make well-informed business decisions.

Get actionable insights and updates about ITFM in your inbox.